Dolls Who Do Nothing

I went to a local Mexican restaurant the other night with Bill, because it was beautiful outside and I wanted to eat at a place with a patio. Eventually, a family came in, grandparents, parents, a boy and girl, but all the umbrella-covered tables were taken, so they sat in the sunshine.

The heat wasn’t the problem. It was that the boy couldn’t see the screen on his computer game. We found this out over his whining, “I can’t see.” He couldn’t play anything.

My cousins and I had similar problems when we were kids, sitting on a broad front porch in small-town Ohio. Our dolls wouldn’t DO anything. Unlike the dolls of today, who come with their own storyline, sets of furniture, period costumes, their own pets, and even musical instruments, ours came in a box (which we fashioned into their bed), a layette, and sometimes a plastic pacifier that fit into a neat hole in their little molded plastic mouth.

There we sat, sticky and warm in our play Keds, and determined what to DO.

We scolded the dolls for imagined misbehavior. Picked them up and patted them awkwardly on their little plastic backs when they were colicky.  Made extra blankets and diapers from leftover fabric.

At one point, we thought it was a good idea to birth them, so we went upstairs to the bathroom, took turns sitting on the closed toilet lid, made grunting sounds, while others took turns being doctors and nurses to help with the “delivery.”

And, then, we decided it was time to feed them. With applesauce.

Naturally, we knew that milk would curdle and smell, even if it came out the hole that was on their opposite ends. What could substitute? Why, watered down applesauce that would go into a little plastic bottle. Time to eat!

You can see where this is headed – applesauce, summer sun, dolls left abandoned on shaded porches in favor of a game of baseball, or running in alleyways after the ice cream truck.

But we weren’t stopped short by a toy that wouldn’t play back with us.

I wonder if we’ve done our children any favors.

By the way, the applesauce was homemade. We were forever “putting things up” back then, including the apples that fell at the end of my grandfather’s dirt driveway. The process went something like this.

One bushel of apples (probably 25-30 medium)
Boil large stock pot of water. Drop apples into boiling water, cooking 10-15 minutes. Put into strainer w/ pestle and grind away skin and seeds. (You can also peel and core them, boiling a smaller size in your own sauce pan…but we were dealing with a lot of apples, at the time.)

Finely mash apples (which we preferred, although you might like chunky applesauce). Add any of the following ingredients or all:
1/2 c. white sugar
1/2 c. brown sugar
3 t. cinnamon
4 T. lemon juice (use fresh)

This sauce freezes well and will provide a burst of summer all the way into the bleak winter months. Do not feed to your plastic baby doll. She’s not hungry. 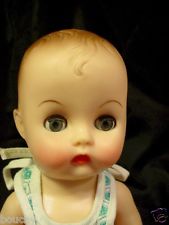