No, we definitely had it worse than you.

Talking about your generation. (With apologies to The Who.)

My youngest and I were discussing a recent article about the terrible burnout of the Millennial generation. Both the parents and children of this generation were led to believe things would continue an upward economic trajectory. The promise was alive: if you went to school and worked hard, you would prosper – at least as well, if not better – than the previous generation. And then 2008 struck America.

The gist of the author’s point.

They’re tired, this group. Turns out, their college costs escalated. Even though they’re one of the best educated generations, they owe enormous debt, took jobs that used to require less formal schooling, and are battling for their careers in the trenches with middle-aged people who had to restart, reset, and are frantically trying to cover retirement expenses. Move over, punk.

If it’s not enough, insult to injury means that the same old geezers who took these entry level jobs are the very folks who raised them to believe that every season of soccer participation deserved a trophy. That their inventive spelling was A-okay. That Disney stars and starlets were leading real lives. Then we handed them a mobile phone, thinking it was a safety feature while we were working dual careers, and flipped opened the world of digital unreality.

Now? Well, now, they are ‘adulting’, a verb applied to the types of transactions formerly associated with being an adult, but which do not always happen in 2018. Buying a home? Maybe not, because their student loan payments are the same as their parents’ house payments. Buying furniture? Not at Ethan Allen (my mother’s preference), sister. Maybe Ikea. Having families? Yes, but the birth rate is decreasing in the United States. They have less hope for the future, thanks to the national and global scene. In short, they are tired.

At this point, I was ready to launch into my trek to school, uphill both ways. Ten miles. In the snow, in every season. It occurs to me, now, that this is the point of telling familial stories, of the recitation about how grandma and grandpa came to own the farm, how our great-grandparents found a way to craft a better boat.

Who the hell isn’t tired?

My generation? Oh, well, one of my earliest memories is of JFK’s funeral procession. And then Bobby Kennedy’s. And MLK’s. It’s blurry to me, through my child’s eyes, the sequence. But I can still see the war in Vietnam playing out over the TV during the dinner hour. My uncle was a pilot and I wrote a child’s letter to him, while he was…somewhere. Far. While my aunt and their four children lived at my grandpa’s farm, we waited for his letters back to us.

And the twins from around the block had an uncle who wasn’t quite right, who was home from the war. He slept on the couch. We weren’t supposed to bother him. He scared me. Nixon was impeached.

And the drugs. Everyone was worried about the Charles Manson gang, while a small book called The Electric Koolaid Acid Test was secreted about. Because, freedom, man. And free love. And Woodstock was somewhere in here, but these were all blurry, too, because we weren’t supposed to know. But a rocket landed on the moon. And again.

My dad lost his job at Plumbrook in Sandusky, OH, because nuclear power, turns out, was not something that the American public was ready to embrace. Cue China Syndrome. Goodbye, Norwalk. Hello, Cleveland. Then, one year later, Jackson, MI, which was already slightly depressed and which I hated.

There was a gas crises in high school; I can remember idling the car in a line at the Clark Station. Our nation celebrated its bicentennial. We painted fire hydrants in a show of patriotic loyalty (whose idea was that?). I graduated two years later.

Oh, but we were talking about the promise of adulting.

My version of adulting? No help applying for college. No one really cared where I went. No help with money, either. Some pocket change. My parents’ relationship was in trouble before the fall I entered college. My mom had received the equivalent of full-time expenses for her high school achievement as valedictorian in a class of 16 students, 24 years prior. She had no idea. Neither did I. I accepted WMU and off I went.

During those years, the energy crises worsened. One holiday season, President Carter asked American families not to hang electric Christmas lights outdoors, in solidarity. And they didn’t.

Hostages were held in Tehran. Not just one or two. Fifty-two American diplomats and citizens were held 444 days, from November 1979 to December 1981, the month and year I graduated.

Jobs were still in short supply, particularly because of the poor automotive market, which tanked Michigan in particular. I moved to Los Angeles, where Bill had been transferred. I took two suitcases and two Pier One baskets tied with twine. From this point, I worked in the crazy-ass LA mortgage industry, got married, moved to Philadelphia, worked three months in accounts payable, moved to Detroit, went back into mortgage banking, and watched the whole preliminary to the mortgage banking crash by packaging jumbo loans (100K+), as real estate agents qualified just about any monkey who applied. Oh, and I was paying back my student loans.

I took every stick of furniture thrown my way. The first time my brother came to our apartment in Farmington Hills, he said, “You’ve done alright with what you had to work with.” And wasn’t that the truth?

This is the T: every generation before us, and I do mean each one, sat down at the end of the day with a heavy sigh. A worry. An insecurity. A fear.

I am no historian, but one thing I do understand is the ever-present trial of mankind. Sometimes we get it right. And many times, we do not. Sometimes, we benefit from our cleverness. And other times, we suffer as fools.

PBS made An American Experience of Coney Island (1991), in which they talk about the fire that burned New York’s favorite amusement park, Luna Park, in 1944. The owner posted a sign on the fence to encourage future guests: “I have trials today I did not have yesterday. But I had problems yesterday that I do not have today.” Although the park never reopened, the indomitable spirit of hope shone through.

Who had it worse?

Possibly the worst thing we could do to our children is to leave them without a possibility of hope. The problem with the trekking-in-the-snow-uphill story is that it negates the current suffering. Oh, suffer, we will. But we will also have moments of the sublime.

You laugh. You see a sunset. You breath in. You dance. You hold hands. You taste. You love.

No more, with the self-pity. My generation definitely had it worse. 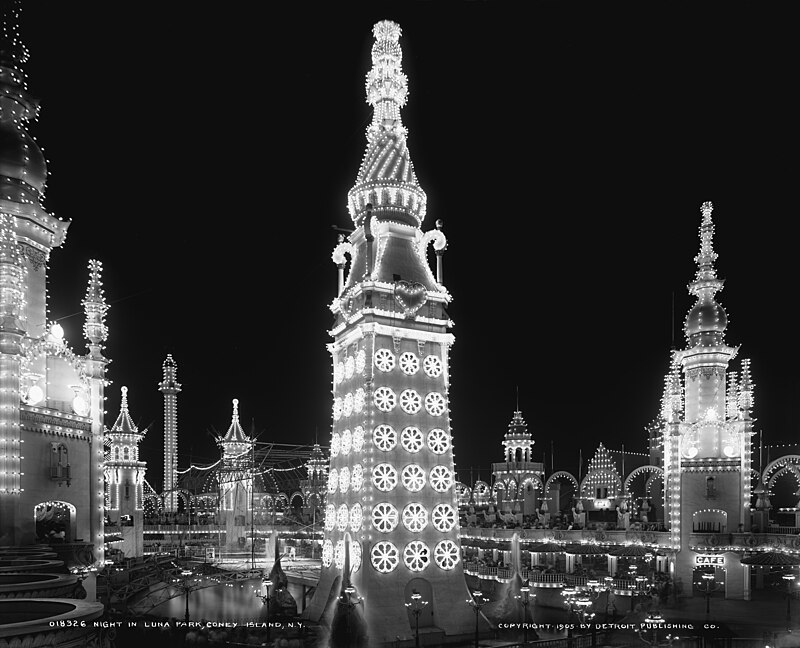 You’ll have to look this up, if you want sources, but studies have shown that people of faith have more hope than those without. This may mean Christianity, but more, it understands faith in divinity and a hope for tomorrow. I’m not here to preach, but if you find yourself short on hope, you might look into faith-based cultures. I have a
C.S. Lewis book I’m willing to lend.

That was then., This is now.